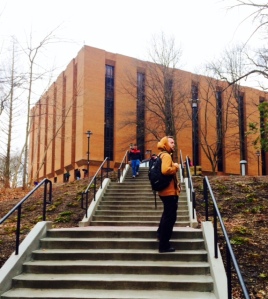 Towson students walking through campus on their way to class.

Kevin Connelly runs his hands through his hair as frustration sets in when signing up for classes. He realizes he has to set-up an extra semester for him to graduate. Another semester means figuring out how to cover extra tuition since his scholarship only covered eight semesters.

Connelly is a student at Towson University and a transfer from Harford Community College. At HCC Kevin completed his Associate Degree in Business and is almost done with his Bachelors at Towson.

However after following all the recommended courses from his adviser, Kevin will not be able to graduate on time.

Only about three out of every 10 students who enroll at a campus in Maryland graduate within a four-year period. The rate of students transferring in from two-year institutions has also increased causing the graduation rate to differ. One of the reasons why is the academic requirements a student must meet at each institution.

“I went to all my classes, got exceptional grades in all of them, I worked hard but I still won’t be able to graduate in four years because of a system,” Kevin said.

He sits there with distrust thinking about the advice he received from his adviser. He keeps checking back and forth, double checking, and triple checking the classes he still needs. He adds his credits up and he double checks that too. Everything still comes up short.

“This time, I can’t let someone else control my situation. If I could do it all over I would go to the four-year institution so I never would have to deal with this mess,” said Kevin.

So where does the blame fall? Consider this, out of all the students who start a major at Towson, roughly only 21 percent will complete that major.

Of all the students who came to Towson in the fall of 2008, expecting to graduate in four years, over half still remain give years later, in 2013. That does not include the students who dropped out. Without including transfer students, only 42 percent of students from that freshman fall class walked in May 2013, which would have been their four-year graduation period, to receive their degree.

Unfortunately, this happens more often than people seem to think about. According to Towson’s website, on average, only 40 percent of students graduate in coveted four-year span. It is actually more likely that a student will graduate in six years than four, as the graduation rate jumps by 20 percent over that two-year period.

“For most students the ‘uh-oh-moment I won’t graduate in four years’ doesn’t happen until their senior year,” said John McKusick, Director of the Academic Advising Center at Towson.

“People don’t finish on time for a variety of reasons,” said McKusick, “some are unclear of their major…some may fall behind in their coursework.”

One big reason some students get caught up is because of the regulations for Federal Financial Aid. In order to receive government-funded aid, a student must take a minimum of 12 credits per semester to be considered full time. But that would leave the student with 96 credits after four years, 34 short of the minimum credit amount needed to receive a degree.

However, if a student were to follow the advice of the academic advising center and take 15 credits per semester, they will end up on track with the full 120-credit minimum necessary for a degree.

But some majors require more than the 120-credit minimum. The number of additional credits can range from 33 to 89 for majors like philosophy and computer science said McKusick.

Some students lay blame on the advising center for their academic troubles. The two complaints McKusick said he hears the most are:

“My advisor isn’t available to me” and “My advisor only had time to answer a few questions.”

McKusick did explain that there is high-traffic during the advising months of February and March, which can make it overwhelming for most advisers.

“The system would work better if appointments were more spread out progressively over the year,” said McKusick.

There are about 4,100 schools in the United States that enroll close to 20 million students per year. Although there are federal laws to govern the education system, each state has it’s on laws and governing agencies to make sure schools are on the same page.

The Maryland Higher Education Commission, MHEC, patrols the state’s public and private institutions to make sure there is coordination between every postsecondary institution. MHEC sets out to ensure that citizens are productive members of the community through receiving a quality education.

The MHEC headed the committee that passed Senate Bill 740 last year in Maryland. The law, effective July 1, 2013, not only requires students to take a fourth year of math, it also requires public schools to work with community colleges to ensure that students are receiving a balanced education. It also establishes a specified curriculum and graduation requirements for students to make sure they are ready to attend a postsecondary institution.

“Without that fourth year, most students were getting to college and taking developmental classes or failing introductory classes like Biology 120 because they didn’t get enough preparation in those three classes or they simply forgot with that time off,” said Kennard Wallace, Towson’s MHEC student representative.

Over 50 percent of students change their major at least once before graduating. While this may be part of the problem, it certainly isn’t the only problem students facing when trying to graduate in four years.

“There are many reasons why students need to stay for an extra year. It’s not always because they failed a general education requirement or changed their major,” Wallace said, “Most of the students that are taking longer to graduate are students in STEM [science, technology, engineering and mathematics] majors like biology or accounting.”

Jinhee Ji, family finance specialist at the University of Maryland, has attributed the rise in six-year graduation rates to a direct relation with the academic requirements students are expected to reach before graduation.

“Studies have shown that students find it harder to achieve graduation in four years because of the system of requirements and the amount of misinformed advising that cause students to take unnecessary credits,” said Ji.

Ji also stated that studies show that the rates for excessive work hours also are to blame for the graduation rates but the academic requirements showed a greater exponential increase in the studies.

“Academic requirements also become an issue because a lot of students have begun to choose the pathway of transferring in from a two-year institution,” Ji said, “For specific fields of study some academic advising requirements do not pertain to a university which puts transfer students behind when they transfer to a four-year institution.”

Schools put in place these general education requirements to go along with MHEC policies. Towson’s Undergraduate Catalog states that, “Towson University’s Core Curriculum Requirements are designed to help students gain essential intellectual skills and knowledge that will be important throughout life.”

Connelly must now begin to find a way to financially support himself for the unplanned extra year at Towson University.

He sits down at the table and sorts out all of the paperwork and begins to fill them out in hopes of a scholarship to support him through his 5th year.

“Watching my other friends graduate on time makes this whole thing worse, but I can’t change anything about it now. I have moved on and all I can do is prepare to finish strong in the extra year,” Connelly said.

When he sees others fill out their forms for upcoming classes, he carefully cautions them on fully understanding what classes they are signing up for. He tries to help educate others on the academic requirements in hopes of helping them avoiding a 5th year due to mistakes.

Connelly’s parents also find it hard to believe that their son will not be able to graduate on time. They have helped him understand the process of college but they feel as though they were misinformed as well.

“I think that parents should also be educated more on how the requirements are set-up. Parents send their kids in for a four-year education not a five-year one,” said Kevin’s mother, Denise Connelly.

For now Kevin continues to study hard and keep up with his coursework. He is expected to graduate in the winter of 2014 with a degree in Finance.

“Don’t worry about why you have to take courses that don’t apply to your major, get them done and out of your way before they haunt you in the long run,” said Connelly.