Keith Larsen has been in the drum retail business since 1976. He got his start at Gordon Miller Music in Towson, Md, a store he shopped at when he was a kid.

“They asked me if I was interested and I said sure,” Larsen said. 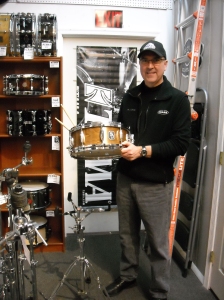 Keith Larsen displays a Baltimore Drum Company snare drum. He founded this company in 1986 and put it on the market in 1992.

He had been playing the drums since he was about 13-years-old, but he was looking to get into the bigger picture of drums. When he was younger, he began expanding his knowledge by restoring his friends’ drums as well as his own.

“I figured retail would be a good way to get more involved with that, and you know, just selling drums,” he said.

Small local businesses grow and succeed by offering their customers services that the bigger businesses do not provide. By finding their niche, they are better able to hone their craft and draw in customers consistently.

“That was exciting because I basically had to prove myself to the owner because I was so green when I started there,” he said.

Stepping back to the present, Larsen’s current drum store Mid-Atlantic Drum is located on Loch Raven Boulevard in Towson, Md. Larsen still does repair drums in his shop, much like he did when he was a teenager, and this gives his store a more personal feel than the big warehouse stores.

“You got to offer much more service than just selling something,” he said. “We don’t want them just to buy it and go away. We want them to come back.”

With residents buying and selling at the local level, all of the money stays in the state’s economy without escaping into other avenues. Shopping online allows the money to escape.

Customer service and better quality items may lead spenders to these local businesses, Rhoads said. These stores hire local staff, therefore the state has an obvious interest in the success of local business he said.

What else draws customers to local music stores? “Personalized service, attention to detail, product knowledge” said business owner Keith Larsen. These stores provide clients with the things that the big stores may overlook.

Though the shelves and floors of Guitar Center and other music warehouses may be filled with the latest drum kits that companies are trying to unload, they might be lacking in those hard to find items.

“It’s exciting because you don’t know what you are going to find,” said Tom Miller, a small business owner himself.

Miller operates his own recording company Tritone Mobile Recording in addition to being a professional drummer.

Miller said that customers are more likely to find vintage, custom or used items at local shops than at the bigger stores. He was lucky enough to snag a Ludwig brand snare drum at Keith Larsen’s Mid Atlantic Drum.

“You find unique items that you wouldn’t find at a corporate store,” he said.

Miller said that this shop in particular offers “more of a sense of community” and a “one to one relationship with a customer.” This allows the customer to feel more taken care of and appreciated.

“They tend to value their customer more,” Miller said.

“The staff is more friendly and helpful. They also seem to be more passionate about music and other musicians,” he said.

Customers respond to the energy and enthusiasm that local stores give off, and in the end the music store’s business is built around the needs of the customers.

“Since they are focused on good customer service, they’re going to be sure to make sure the customer is always pleased,” Sova said.

The local store does not try to sell customers things that they really do not need. Local stores need returning clients, so they are apt to help as much as they possibly can.

“They don’t give off like they have to make a quota,” said Miller.

The larger warehouses sometimes try to unload a product even if it does not suit the user. The customer becomes a statistic in a sales column on a desk somewhere. They cease to be a real person to the giant company.

“People should go local because local businesses are more flexible and they are more focused on the customer experience than larger stores,” Sova said.

When Larsen started working in retail in 1976, he had no long-term plan of becoming a business owner. He enjoyed playing the drums and wanted a job that let him work with something he loved to do.

This motivated Larsen to want to pursue the opening of his own shop by taking his skills and working to help others enjoy the drums. But even following his passion could not shield Larsen from some of his early struggles with his business.

“In 1998, we had a catastrophic fire which was at a new shop that we just moved into,” Larsen said. “It was an electrical fire and it basically burned down almost 90 percent of the facility and inventory, our brand new paint booth, all of our machinery and everything else I had worked up to just to get to that point.”

With this devastating occurrence, Larsen now had to split his focus between rebuilding his industry and solving some problems that were already in existence.

“At the same time, I had to get my partner at the store out of daily operations for several reasons,” Larsen said. “He basically had to go. So I was trying to do both things, fix one and fix another, at the same time.”

As if damage to his supplies and negative relationships were not enough, Larsen now had the Internet to compete with. eBay was a recently started company at the time and the ease of selling one’s own belongings online left Larsen in a rut.

“I still really wanted to make drums, but I didn’t know how to get back up to where I was as far as rebuilding and starting over,” Larsen said.

Larsen decided to give it yet another shot and try anything he could to re-start his work.

Fifty-four percent of all U.S. sales come from the 23 million small businesses in America, according to the U.S. Small Business Association. But for all of the successful small businesses throughout the country, the start-up process is one of the toughest challenges that small business owners must overcome.

Sean McEvoy, the director of the Office of Small Business Resources within the Maryland Department of Business & Economic Development, assists small businesses, especially when it comes to funding.

“In my office, we are currently preparing a request proposal for a financing program for small businesses,” McEvoy said. “I am also personally reviewing two small business start ups that are looking for funding and support.”

McEvoy’s office typically receives anywhere from 200 to 300 inquires a year. He most often receives questions on how to start a business.

“First, you have to form a business and that business needs to be a separate entity from the person,” McEvoy said. “You can begin your business as a sole proprietor, but it will be draining.”

After the business plan is established, McEvoy suggests searching for customers and making it interesting to them. Some owners may have pre-existing clients that could become potential customers.

Following that, the next step is to create a formal business presentation to employees. This would serve as a good way to find possible investors or partners.

“Look for people who have different aspects of strength than you,” McEvoy said. “Find key people along the way that can help you execute growth.”

That is exactly what business owner Anthony Tedeschi did in 1993 when he partnered with high school friend Chip Heuisler to take their business to the next level.

“We have always wanted to open a record store together,” Tedeschi said. “I opened the store and he signed on afterward. He really helped me bring leadership and management to the operation because there were times when I felt way over my head.”

Tedeschi’s business, Tunes, is a small, local chain that sells CDs, DVDs, videogames and other collectibles. The original “Tunes on Dunes” name tied in the roots of the business.

“We started in Ocean City, N.J., during the summers and then moved in to Marlton,” Tedeschi said. “Then, we started branching out in other parts of south Jersey.”

Trying to manage the six stores that make up the chain brings additional stress for Tedeschi. He admits to feeling consumed by the store, especially when it comes to finding stock for his store.

“We specialize in buying used products for resale, so one of my jobs is to kinda go out and find stuff,” Tedeschi said. “I use Craigslist for leads, I cold call other stores, and I go to estate sales.”

One issue for many small businesses is having the man power and resources to stay up-to-date with larger, national organizations. Tedeschi recognized that stores like Target and Best Buy sell the same type of inventory as he does and they are well-known names.

But in 1995, he used his business skills to work with some customers who were talking about the Internet in his store to put his inventory online. At the time, the store was doing well, but Tedeschi wanted to stay one step ahead of competitors.

“I was probably one of the first people to ever sell music online,” Tedeschi said. “About 60 percent of my inventory is sold online. The stores act almost like sourcing centers.”

With the recent opening of Tunes’ newest location on Loch Raven Boulevard in Towson, Tedeschi hopes his skills for marketing in Jersey will make him successful in Maryland as well.

Larsen began building a name for himself as a “brand builder,” meaning that he was someone who wanted to take chances on unknown brands because he felt they were new or exciting and wanted to try selling them.

One brand that Larsen helped build, Tama, is still sold today in his store. In his earlier days in retail, Larsen had met a representative from the company and, after taking an interest in the company’s catalogue, persuaded his boss to let them get one in the store. 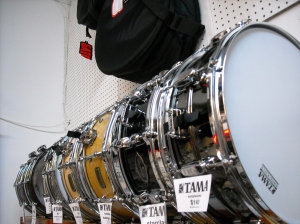 Tama snare drums are a popular item at Larsen’s store. Larsen sold many drums like these when he worked for Gordon Miller Music.

“He let me buy one, came in, set it all up by the front door and sold it in 20 minutes,” Larsen said. “With that particular brand, I was the number one seller of Tama drums in the country for about five years.”

Larsen also wanted to be successful in a way that other larger drum companies were not by offering services to the community outside of sales, even acting as an informal teacher.

“When we sell drum heads in the store, we offer to put them on for free and tune the drums and show you how to do it. It’s a really good free service that we offer,” Larsen said.

Larsen also holds free store clinics during the week and has local drummers come in to share their playing styles. For Larsen, every effort to become a more proficient drummer is positive.