Tucked away in an L-shaped alley between North Avenue and Howard Street in Baltimore is an oasis of color.  Bleak, disheveled buildings mask the hidden paintings of a unique culture of artists: graffiti artists.

Between the brick buildings you will find graffiti artists spraying the alley with a fresh coat of paint. They refer to themselves as writers, and the walls of the alley are their canvas where they can experiment and develop their style without fear of punishment.

“The alley was a heroin shooting alley and a blow job spot for people who didn’t want to rent a room at the motel next door,” said Mark Sherwin, the owner of the Load of Fun gallery whose walls form the alley.

Since the birth of Graffiti Alley, the culture has shifted from criminal to lawful.

It is a vibrant and positive atmosphere, said Sherwin, who was able to convince Baltimore City officials to allow graffiti in the L-shaped alley.

“The alley gives graffiti artists the opportunity to spend extended time doing their creative work without looking over their shoulders in fear of prosecution,” he said.

Lauren Garcynski, the owner of Random Eye Candy Photography and a photographer who used to rent a studio at the Load of Fun gallery said, “It’s the only legal spot in the city where you can graffiti.”

Garcynski said the alley is an asset to all forms of artists from photographers to models to painters.

“It’s never the same thing twice,” she said. “It’s a really nice place for people to meet each other and be creative and to take advantage of the space. There aren’t many places in Baltimore city that encourage artists, especially street artists, and I think it’s really cool to have areas like the alley.”

Charlie Peacher, who has shot photo and video at the alley, agrees.

“I love the concept and I really wish there were more places like the alley,” he said. “Graffiti alley is right on the edge of a not-so-good neighborhood, and I think it really makes people think a little bit harder and realize that there’s more than what is around them, and they can create that if they have the motivation to do it.”

That motivation often comes from a pure desire to create beauty in the not-so-beautiful streets of Baltimore.

“I’ll bet there are less than a small handful of Baltimore artists who are actually making a living solely from their art,” Sherwin said. “That means creative people do things because they want to or need to or are compelled to, not because they can make any money from it. Artists of any medium very rarely sell anything or make a living from their art in Baltimore.”

One of those creative people is Graffiti Alley artist DESA, formerly known as 4EVA. DESA is the signature he uses to sign his artwork. 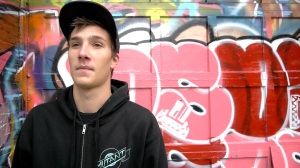 Graffiti artist DESA a.k.a. 4EVA standing in front of his work.

“I do it as time to myself,” said DESA of his art. “But it’s also a reminder that I’m here. It’s nice to be able to drive down the street and see something I’ve done.”

DESA doesn’t confine his art to the alley.

“I do think graffiti belongs in the streets,” he said. “It might be legal here, but this isn’t my primary place.”

Graffiti Alley is a sort of safe haven for writers. But most writers venture beyond the walls of the alley.

“I’d be lying if I said I didn’t do it for the thrill. I do get the enjoyment of not knowing if I’m going to make it home or end up in jail by the end of the night.”

Writers often work under the cover of darkness to keep from getting caught. DESA said it’s not unusual for writers to be out at 5 a.m. with a lookout. Your level of getting caught is dependent on the area and time of day.

But graffiti is about more than an adrenaline rush for DESA.

He has always been interested in art. As a child he loved to draw, it was something he picked up easily.

“When I was finally old enough to comprehend what a writer was, I started with pens, markers, and when I got the confidence then I came out to paint,” he said.

After years of practicing his art on the sides of buildings, DESA is building his portfolio to apply at the Maryland Institute College of Art.

7 thoughts on “Graffiti Alley: An Oasis of Color”